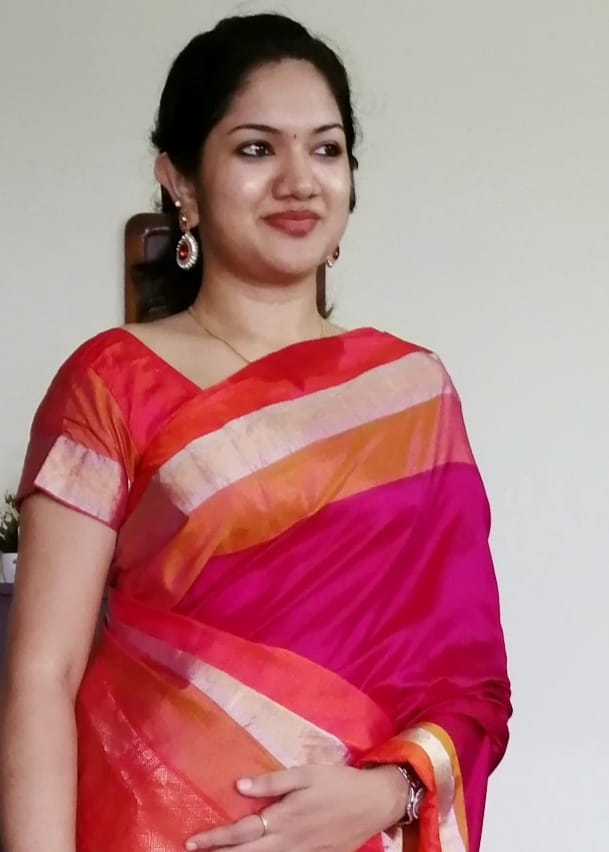 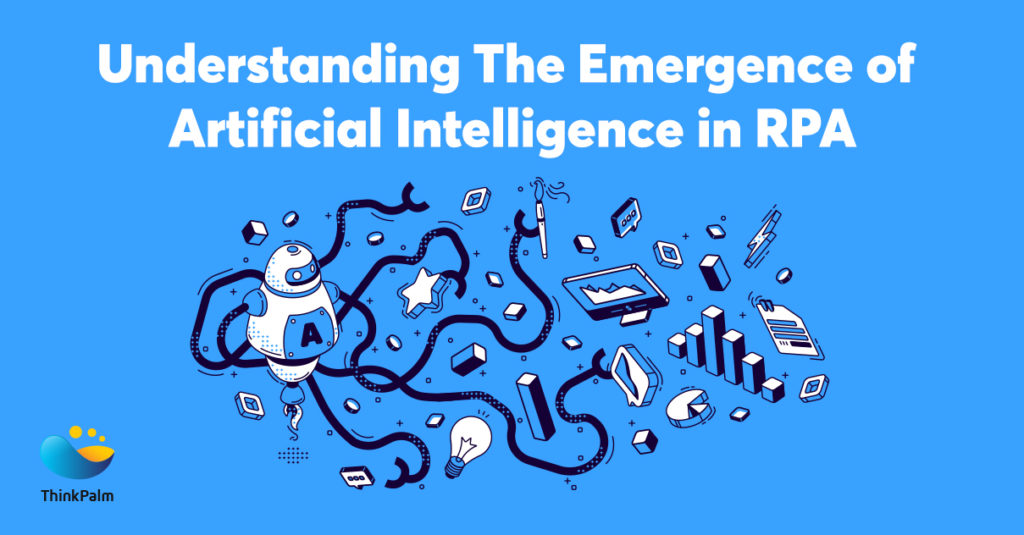 The world is facing a continuous change due to the ever-increasing scientific and technological development and innovations. These innovations in technology is growing in an exponential manner. With the advent of the fourth industrial revolution, technology has drastically controlled the market. Individuals have become so dependent on its products that they can’t imagine a life without them.
Keeping abreast with technology will be beneficial for enhancing business. This increases the customer satisfaction and reduces the risk of being left behind.
The recent technological advancements have contributed a great deal of things to the humanity like:
• Seeing AI – which talks to the blind about the things in front of them, helping them to make immediate decisions. It’s currently in five languages.
• Amazon go – where people can walk-in to the store and pick up the things and walk-out without being stuck in queues for billing.
• Construction Safety Equipment – which immediately notifies the supervisors if any safety violations like removing safety gear, walking outside of safety line etc. have done by the workers in the construction site.
• Custom Cancer vaccines – which helps in destroying only cancer cells by finding the structural change of genes specific to each tumour.
• And many more.
These advancements facilitate in enhancing the quality of human life. Artificial intelligence (AI) is acting as the main driver for these technological advancements coupled with Machine Learning along with IOT and big data. Thus AI becomes the actual game changer for this century.
Gartner, the world’s leading research and advisory company, has given a statistical chart as shown below (Figure a), which shows the business value forecast prepared by them against the AI type. 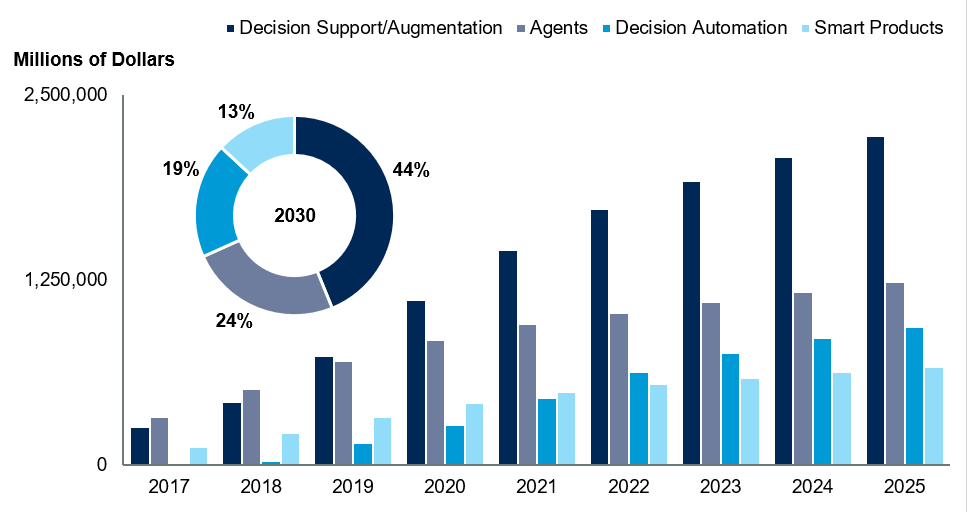 Till recently, software applications with little human intervention was beyond imagination. Thanks to the Robotic Process Automation (RPA), which made this into reality.
RPA is yet another technology like AI or ML. It allows to automate the repetitive and mundane tasks done by humans using computers with the help of pre-defined set of business rules given to the bot as commands. It is a program which runs on systems to automate different applications including web portals etc. Simplest example could be copying text from text file and sending it in birthday emails to the customers daily.
RPA reduces the time to complete the tasks and gives more quality output and has benefits as shown in the figure below (Figure b). Thus making the workers to use their time more effectively for higher value tasks. 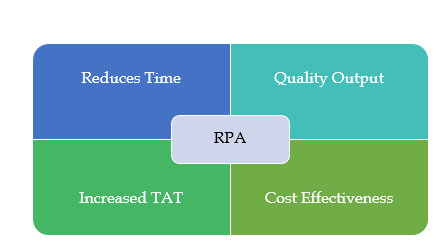 According to Gartner, finance departments would be prone to human errors which can result in 25,000 hours of rework in a year. This could be avoided with RPA.
It helps the humans to waste less time on monotonous tasks that they hated to do. Basically, it helps the robots to learn rather making humans act like robots. Work really works when we are happy at it!
Though RPA is a powerful technology, it is just a rule based system, with no intelligence, which works only on structured data. As we know, Artificial intelligence rules today in all walks of science and technology as cited in examples above. Introducing AI in RPA resulted in a divine combination of intelligence in process automation which is also called Hyper Automation. This is sometimes referred to as ‘Digital-twin’ of the organization. The idea of merging AI and RPA came into being in the middle of 2019.
Hyper Automation could be explained in simpler terms with an example. Let’s consider the accounts receivable invoice processing which needs to be automated. RPA would be able to process the PDF invoices with text content. Whereas if the PDF contains scanned images RPA won’t be able to process and would treat as an exception. Which needs to be processed with the help of a human operator. The same scenario would occur for all the cases of unstructured input data like audio, video etc. This is where the significance of AI in RPA, which would help incorporate algorithms to treat unstructured data and to run complex tasks.
Hyper automation makes RPA more efficient and brisk. Rather than just doing predefined set of business rules it also instructs the bot:

• what the next step is, by pattern recognition using ML
• to perform complex tasks
• to apply logic for decision making
• to automate in virtual environments
• to understand the meaning of natural language inputs using NLP

In short, hyper automation is a combination of the advanced technologies as shown in the figure below (Figure c). Let’s take an example of talent acquisition, rather than doing the entire process manually, hyper automation can help in selection of appropriate candidates from bulk resumes from their website/emails.

Now let’s see different RPA tools available in the market. There are quite a few, out of which Automation Anywhere, UiPath and Blue Prism are the most promising ones.
Automation anywhere, which was ranked #1 in HFS top 10 in RPA for the 2nd consecutive year, is the first one to include the AI component. They have named this AI add-on as IQ Bot. It helps in:

The UiPath is developing a solution called AI Fabric which adds AI to RPA. Researches are happening with Blue Prism for integrating the Artificial Intelligence component.
Technology is all about making our lives simpler and delightful. It has grown to an extent that people can tour around the world without even compromising on their careers, calling themselves as location independent workers. Hyper automation can make the life of the business owners easier. It is a boon to the business. Thus by adding intelligence to the automation, we can significantly improve the productivity, reducing waste, increasing the TAT and can eventually lead to profitability.

Sumi Scaria works as a Business Analyst at ThinkPalm Technologies. She has over 3 years of industry experience and her hobbies include cooking and reading.