What Is Automated Software Testing And How Does It Make Software Development Much Easier?
Test Automation

What is Automated Software Testing?

Automated Software Testing is the process of verifying a particular software in terms of any errors, gaps, or any other issues in order to meet the actual requirements. Not just software techies, everyone who understands digitalization can know the difference between manual testing and Automated Software Testing. In manual testing, one needs to make sure physically that the software is free of any errors or shortcomings and that it meets its goals for which it is made. It requires repetitive attention and time on a very large scale which often becomes a hindrance in attaining quicker goals.

On the other hand, Automated Software Testing, as its name indicates, is automated. Its major advantage is time-saving and the avoidance of repetitive manual work in terms of checking errors, especially for larger projects. With the right testing tools, the quality assurance team can easily detect the defects, compare the results, and modify the end result within a considerably short span of time. Automated Software Testing stands out among the most flexible and lightweight approaches in application development for even high-end technologies such as IoT services and Cloud application development.

Why is Automated Software Testing Important?

As stated earlier, Automated Software Testing takes comparatively much lesser time and hence with the right testing tools, multiple tests may be conducted from different user perspectives. It doesn’t need any human interference and may increase the overall test coverage. It reduces the testing time and helps in delivering quality software as the end product. Hence it helps the quality assurance team to ensure quicker results without much human involvement. It helps in achieving a flawless result which in turn leads to many benefits in the course of time. 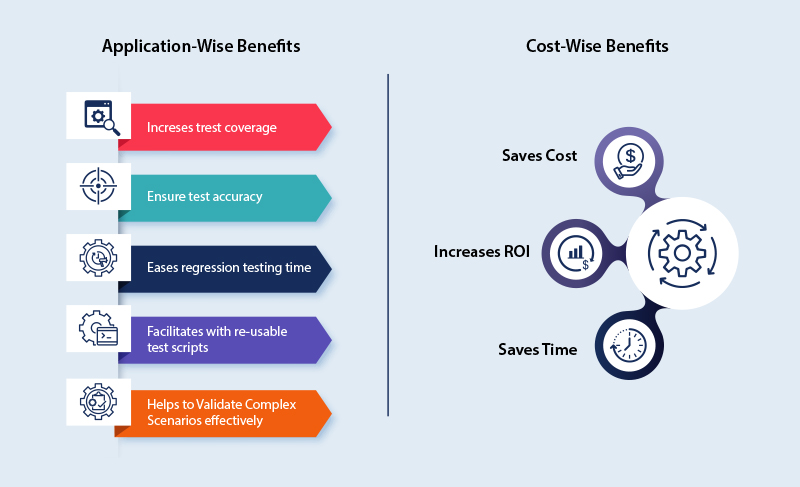 The major benefit of Automated Software Testing is of course the reduced time it takes for the testing process involved. Even if multiple tests are conducted, it won’t take as long as it may in manual testing.

With an Automated Software Testing system, the number of human efforts that are needed in the testing process is quite less, as algorithms do much of the work. It in turn leads to saving time, resources, and effort on a large scale.

Automated Software Testing ensures more accuracy of the final product as silly errors that may occur due to negligence, fatigue, or time constraint can be eliminated. This will help testers achieve better accuracy and increased product performance. Another thing that helps testers immensely is having an emergency recovery script to fall back on in cases of trouble.

Even if the test has to be conducted on a large project/product, it can be seamlessly done with Automated Software Testing. Multiple tests can be done on various modules, irrespective of the coverage of the project and that too within a lesser span of time.

Automated Software Testing ensures validating complex scenarios that may generally come within larger projects. This may take much effort and time in case of manual testing.

It involves a considerably large amount of time for regression checking in a manual testing system. As far as Automated Software Testing is considered, it reduces regression testing time by avoiding the chance of unidentified bugs that may occur due to lack of attention, repetitive tiring processes, and human fatigue.

The initial cost of developing Automated Software Testing frameworks may be high, but in due time once a successful testing framework is developed and implemented, it leads to cost-saving on a very large scale. As enterprises, leverage test automation the testing process and production updates are done at a higher pace which in turn leads to cost savings.

Automated Software Testing is of great advantage especially when an enterprise aims at achieving a better return from their investment. When the testing and implementation is done at a higher pace, the return of an investment will also be huge.

Manual testing takes time to get feedback on an improvement or new feature. But once the testing is automated the feedback cycles are reduced considerably which helps in updating the final product faster.

When the testing is automated it saves a lot of time in terms of testing, taking feedback, updating, editing, and overall modification of the project. This, in turn, leads to quicker production for the enterprise, and hence the product reaches the market faster.

Enables the inclusion of more features

Easier for the quality assurance team

Automated testing saves cost and time, reduces human errors, and helps improve the overall quality in different aspects. It will also be less stressful for the quality assurance team to perform their tasks.

When a suitable Automated Software Testing framework is developed, the stress and workload on the manual testers are reduced to a great extent. Their motivation and effectiveness may increase and eventually leads to better performance from their side as well.

Test automation is evolving very quickly, new tools and technologies are emerging almost every week, but they are not yet fully replaceable, and everything cannot be automated. Without human intervention, it is impossible to construct the testing process, since testing requires intellectual intervention. Therefore, the right selection of automation tools, testing processes, and teams, are important players for automation to be successful.

Vinitha Vijayan is an IoT sales expert with 10 years of total industry experience.  Her hobbies include gardening and traveling.

Are you looking for a complete Digital Transformation? If you don't know where to start, we can give you a free consultation

Are you looking for a complete Digital Transformation? If you don't know where to start, we can give you a free consultation