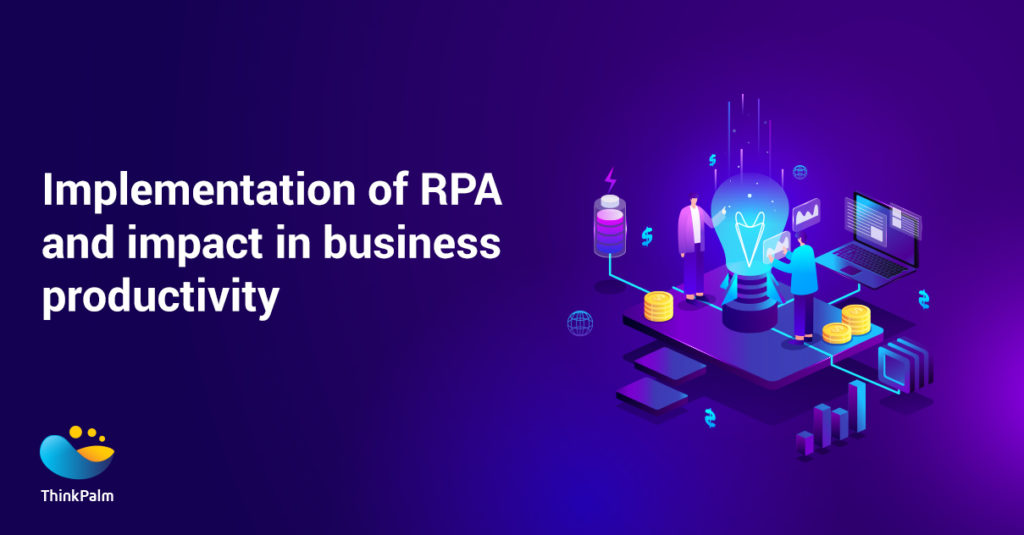 Automation – not just another fancy word when it comes to speeding business processes up. As repeated and monotonous jobs in a workflow can be automatically carried out with the help of silicon and codes, the basic concept and associated methodologies of it proved to grow beyond scale even when the world was just taking baby steps into digitalization. When screen scraping first evolved into its next level in the early 2000s, automation joined hands with the then prodigal science product, Artificial Intelligence to form RPA (Robotic Process Automation), a fresh kind of wine packed in a somewhat age-old conceptual bottle. With little to no doubt prevailing on how machine intelligence and their autonomy could one day take over the world, experts suggested undeniability in the exponential growth of RPA in future. And ambitious businesses proved them right.

Taking a peek: What is RPA?

Robotic Process Automation brags of using brand-new intelligent software robots, aka. bots, to mimic human activities on GUI to fulfil a process instead of using APIs to link back-end with user-defined automation commands as in traditional automation systems.
To put things into perspective, RPA employs traditional automation methodology with multiple layers of “if” clauses to open up numerous branching chains of possibilities to a situation, and code the most suitable output for each of them. So the next time a scenario occurs, the bot can crawl through its various hidden layers of logical outcomes and arrive at the best output action, and then follow the path it’d learned from the human agent, negating the need of a human to come up with a solution –– in simpler words, according to Prof. Leslie Willcocks, Prof. Mary Lacity, and Andrew Craig stated in their 2015 study, RPA replaces “some or all of (repetitive) work previously performed by people” instead of just “assisting” humans through scripts.
Okay, but how all these translates into business productivity?

How RPA can improve business productivity in 2020?

Just like any other ground breaker in global business playground, RPA brings with it a very specific set of qualities –– perhaps some of them so unique that organizations might someday be hopelessly accustomed to, and wonder how a world would be possible without it. Like human augmentation.
• Human Workforce Augmentation –– With close connections to AI, the RPA bots deployed on-site can very well mimic human agents, but when it comes to augmented intelligence, they can also do certain things that was previously presumed to be the monopoly of humans; like taking a rule-based action, comprehending on-screen data, extracting and analysing information from data sheets and hard copies, machine-to-machine interaction, continuous monitoring and apprehension of errors. In fact, as the name suggests, it “augments” the entire workforce with a wave of transformation, minimizing human errors and improving process efficiency, converting operations into engaging, promoting well-being of teams, all the while paving a new way of meeting human resource requirements, and disrupting traditional cost models.
• Cost Model Revamp –– As we’re already into RPA, there are two major costs we need to consider; the cost of outsourcing, the cost of implementation. Businesses run with a profit-motive, and off-shore outsourcing centres were introduced to first-world businesses with the sole purpose of improved profit numbers. Not forgetting the fact that it has improved the quality of output as well as the workforce itself in offshore countries, it’s to be noted that majority of these outsourced tasks are customer-oriented, and repetitive in nature. Think BPO.
Now with a choice of questioning traditional job offsiting, it’s high time businesses consider RPA to replace employing human workforce to these mundane tasks, while the said workforce could be used productively elsewhere. With a similar level of human effort involved, RPA can be developed to a level that incorporates augmented and artificial intelligence to its core so as to improve the figures on board without cost wastage and human-induced errors.
Yes, the initial cost of implementation would be high. But when you want to transform, what are you aiming at? Temporarily stable foundation with diminishing profits, or peaking cost and return charts with a future-proof business model?
• Improved Supply chains –– Another area of business where RPA has the most potential, but often overlooked at, is supply chains. In the middle of drastic transformations going on and around, SCM might seem the weakest link that offers abruptly ignorable values of returns upon investment. But here’s an unordered list of possibilities one could explore to revamp legacy supply chains with minimal RPA investment, and gain enormous returns:
o High-scalability of automation resources open up inventories to another level of operation, storage, and management.
o Standardization in processes with end-to-end IT assistance that facilitates fail-free, fool-proof automation, real-time tracking of resources and materials etc.
o Minimalized human errors improve purchase figures while bringing down overheads and cost wastes.
o Faster transport with efficient utilization of human workforce.

Integrating AI and ML to RPA is like arming a seasoned warrior with the fabled Valyrian steel; what was already been done well be now done even better. With machine intelligence incorporated with the presumed “ability” of computers to learn repetitive, rule-based happenings in business, and this duo fused with automation, imagine the cognizance a computer would have! Beyond a strict framework of ‘what to’s and ‘how to’s, a modern-day machine can sense data –– it can see, listen, analyze and comprehend information from its surroundings and later induce these performance data into its codes autonomously –– note, autonomously; and later deploy these processed data to form logically reasonable outputs the next time a similar situation occurs, and repeat for automation.
Bots become intelligent. And intelligent bots mean less errors with lesser maintenance. It also means improved business productivity and top-of-the-charts ROI.
If you could risk the possibility of an actual Skynet being risen into the world, RPA is the way to go. Discussions may be ongoing how it’d impact outsourcing and human involvement in IT; but for now, global businesses are certainly benefitting from it, and for that reason, we’re in safe hands.

Nikhil PS loves to indulge himself in researching and creating a wide line-up articles. Being a technology-aspired content creator and experienced copywriter, his works focus on adding value to the reader's time and effort, all the while providing necessary information in the most reader-friendly manner. In his leisure times, you can find him in the middle of huge stacks of books or in front of his PC, gaming.